The polyvinyl chloride, better known as PVC, is one of the most widespread plastic material in the world. It was discovered in 1872, although the industrial production began in 1936. The PVC is produced by using two natural materials: 43% ethylene (derived from oil), and 57% of chlorine (derived form common salt). Using chlorine leads to saving on scarce renewable resources, thanks to this the process require 50% less oil. Chlorine in fact is derived from the electrolytic cleavage of sodium chloride, whose reserves on the planet are practically unlimited.

The chlorine present in the molecular structure of PVC is at the origin of its chemical-physical characteristics, including its ability to interact with numerous substances and additives and give rise to products capable of covering a wide range of applications. With over 50 years of marketing behind it, PVC is today a mass-produced product in continuous technological development, of great importance for the production of consumer goods. This widespread and accepted presence is not surprising. PVC is in fact one of the most versatile thermoplastic resins in the world, with a considerably wider range of uses than any other plastic material. However, it is important to affirm a concept: the diffusion of PVC is such and such is the contribution that PVC has given and continues to give to vital sectors for society, which must seriously reflect on the feasibility and opportunity of its replacement, an attempt appeared too often indispensable to many.

Airplast® products are suitable for any modern application. Private houses, offices, hotel rooms, shops, shopping centers, bars, pizzerias and restaurants, sports facilities, gyms, museums, churches, libraries, theaters and cinemas. In addition to environmental comfort, they offer comfort to the eye, because they lack all those imperfections that aggravate products made of steel or aluminum. PVC is in fact aesthetically beautiful to look at and, if there are traces of impurities on the product, Airplast® PVC products can be cleaned simply with water and soap, or they can be placed in the dishwasher since the operating temperature reaches up to 70 ° C.
Sectors in which Airplast® products are the optimal solution are:

The PVC profile, due to its physical characteristics, does not produce condensation, contrary to what happens with the aluminum profile. We will see the consequences, the formation and the conditions of the condensation phenomenon. By installing a PVC product there is no risk in terms of condensation.

By its nature, the PVC profile has excellent thermal insulation properties:
PVC is characterized by a very low thermal conductivity.

By its nature, PVC has a high specific heat, that is the amount of heat necessary to increase the temperature of a gram of material by one degree. It is equal to the thermal capacity or Cp.

The atmosphere we are surrounded by is a mixture of dry air and water vapor. This one is formed following the evaporation of the water present in nature: in the home significant quantities of water vapor are produced by the plants, kitchen activities and by the breathing and transpiration of the occupants.

The water vapor produced is absorbed by the air in quantities dependent on the environmental conditions, determining an increase in the moisture content: the maximum quantity of steam that the air can absorb is called the saturation quantity and is an increasing function of the temperature (with the same volume).
The evaluation of the condensation phenomenon involves the analysis of the following characteristic quantities: the absolute humidity (UA) represents the quantity of water vapor contained in the air volume unit (q/m³); relative humidity (RH) represents the ratio between absolute humidity and the amount of saturation (%); the dew temperature is the limit temperature below which the humid air, by cooling, forms condensation. In order to know the temperature below which condensation will form, it is necessary to refer to the tables and graphs depicting the water-vapor state balance: 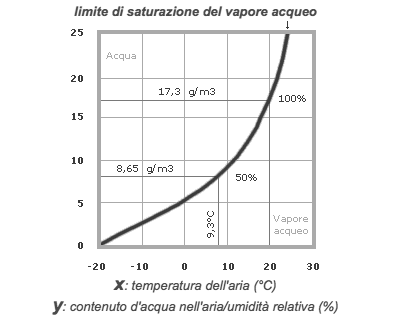 The figure shows that the air with a temperature of 20 ° C and a relative humidity of 50% has a critical dew point temperature of 9.3 ° C (according to the DIN 4108 standard the conditions of T = 20 ° C and UR = 50% are representative and can be considered as a reference for average winter climatic conditions): we can therefore deduce that the phenomenon of condensation occurs where there was a surface temperature lower than 9.3 ° C 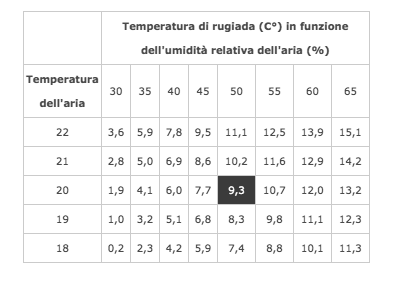